The OS for the rest of us

RhapsodyOS is a recreation of Apple's Rhapsody
operating system, created somewhere in the '90s
after the Copland debacle. RhapsodyOS is based
on the OpenStep kernel (similar to the NeXTSTEP
kernel that Rhapsody itself was) with custom UI
elements, such as the Macintosh-like status bar
and desktop. 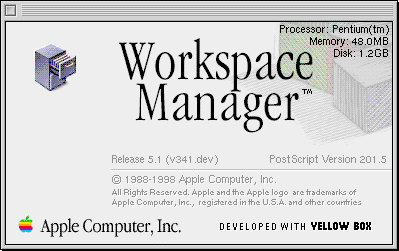 RhapsodyOS is basically just an x86 Macintosh,
created from the same base as Rhapsody. There is
no real practical reason why you should use it
over Linux or Windows, but it's a pretty cool idea
at least...

What does it run on?

When will it be finished?

Since development is a never-ending process, it
won't ever really be finished. There may come a time
when it's usable (highly), but there never will be a
finished product.